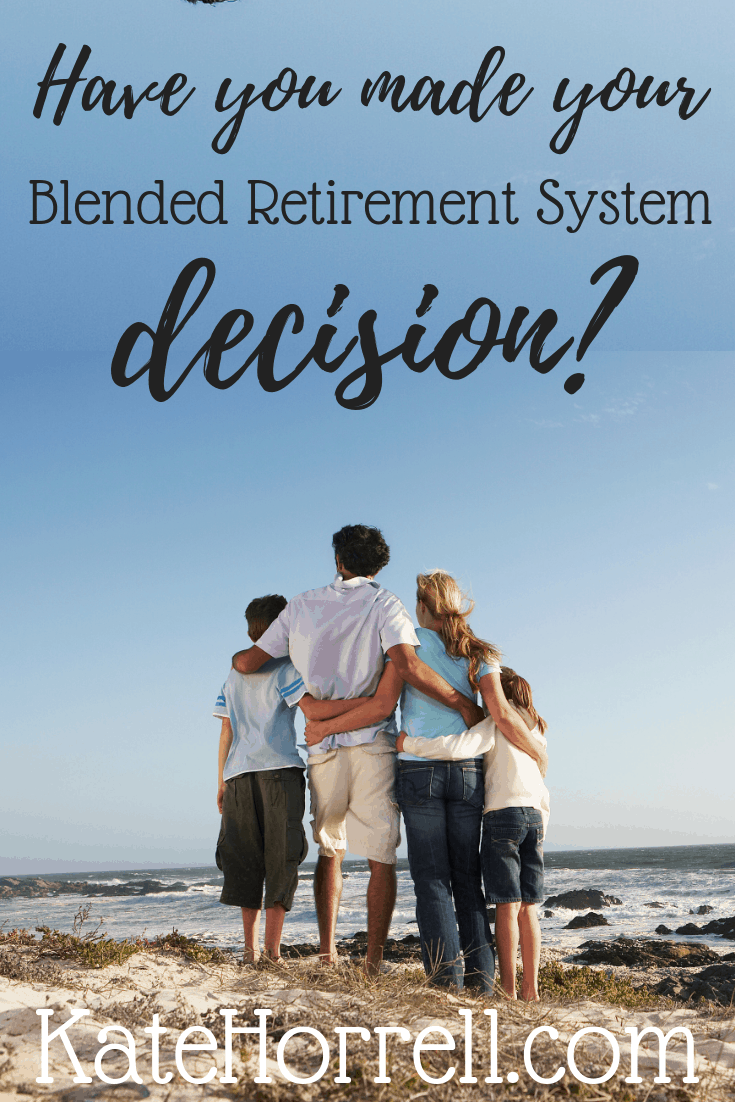 This post is sponsored by USAA as part of the effort to get BRS Education to every service member, USAA member or not.

The Math of the Blended Retirement System

I’ve been involved in a lot of conversations about BRS since it was initially announced in 2015. (Yes, it was really 2015 when I first wrote about BRS.) It’s interesting that about 90% of those conversations are about the math: how much more retirement you’ll get under the legacy system (20%), how many people make it to retirement (83%), how much more money you’ll have in your TSP account under BRS (it depends). Obviously, the math is an important part of the decision. It’s important to understand the numerical differences between the two plan – at least as much as you can, because BRS is more dependent on investment performance, and none of us can predict how those investments will fare over the next year or 40.

Thankfully, there are some useful calculators out there.

The Department of Defense BRS calculator strikes a good balance between including a lot of details and not being too overwhelming. Skip the part about the lump sum option, because it is a bad idea and I am hopeful that Congress will eliminate it before it even comes to fruition. One major flaw in the DoD BRS calculator is that it doesn’t show the value of TSP contributions made by service members who remain under the legacy retirement system, because “The TSP is not part of the Legacy Retirement System.” I think that is a bunch of crap, but whatever.

The USAA Calculator is simpler, which can be good if you really don’t understand all the details. (But I encourage you to understand the details.) It asks for less input from you, but it also provides fewer results. It has nice graphs and it is very easy to understand. It’s also attached to other BRS educational information. You don’t have to be an USAA member to use their educational information and the BRS Calculator. USAA provides these tools to everyone, for free.

My friends at Redeployment Wealth Strategies have an Excel-based calculator for those who are looking to really get into the nitty-gritty, and my friends at The Military Guide have an equally nitty-gritty Google sheets calculator.

Between these four tools, you should be able to find something that helps you compare the numbers. And that’s a key first part of the equation. But it is very important to remember that it isn’t just about the math.

The Realities of Life (or, Retirement Roulette)

Doing the math is important, but the real decision making is when you look at how life actually happens. The biggest problem with the choice between the legacy retirement and the BRS is that no one can accurately guess whether they’ll continue serving until retirement.

That means that the only people who should even be questioning the BRS choice are those folks who are going to earn a military retirement paycheck. There’s a huge problem with that: no one can predict at 2, or 8, or even 12 years whether they’ll make it to a military retirement. According to the Rand Institute, even after 12 years of service, an service member has a 15-19% chance of separating before retirement. We all know folks who were separated from the service at 15 years, 17 years, even 19 years (yes, that’s rare), for a wide variety of reasons. Sticking with the legacy system is a gamble that might pay off in larger retirement paychecks, but at the risk that you’ll walk away with nothing (except your own TSP contributions, which are important but not really relevant to this conversation.)

Think people don’t leave the military in the years leading up to retirement? You should read: Career Expectation vs. Reality: 9 Friends Explain Why They Left The Military and I May Need To Leave The Military Early.

Plus, BRS gives you more control over your career choices. Instead of being stuck trying to slog it out until retirement (we all know those people, right?), having a larger TSP balance makes it easier to say, “You know what, this just isn’t work for me anymore.” As my friend Doug Nordman says, “It’s not about the money.”

The Other Benefits of the Blended Retirement System

TSP funds are inheritable. Military retirement pay ends with the death of the service member. Yes, you can buy Survivor Benefit Plan (SBP) coverage to provide income to eligible beneficiaries after the death of the service member, but there is a cost and there are specific limitations. There’s no cost to pass your TSP balance as part of your estate, and there are fewer restrictions on beneficiaries. With a larger TSP balance, you might elect less SBP coverage, or no coverage at all, savings those premiums.

TSP has flexibility in withdrawal options. You can defer withdrawal of balances, based upon the contribution type, or you can start taking those withdrawals before the regular minimum distribution age. I don’t recommend it, but you could take your whole balance and go on a really amazing vacation or buy a brewery. (Please don’t!) Having control over the distribution of a larger portion of your income gives you more control over your entire financial plan.

BRS isn’t the right choice for everyone, but it’s a great opportunity for a large portion of the eligible population. If you haven’t made your decision yet, carve out some time to learn all the details and think this through. It’s likely one of the largest financial decisions you’ll make in your military career – don’t let the opt-in window end without making a thoughtful choice.