I want everyone reading this to know that I truly believe that many military members are working too much for far too little pay, and plenty of military families are struggling financially. However, that’s not the point here. The point of this piece is to evaluate whether military families are living below the poverty level. The 2013 pay charts are used for this study. 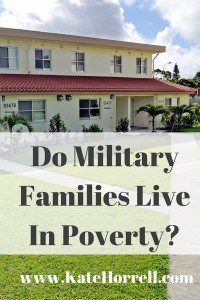 In any analysis of military families and income, there is a debate over how to account for allowances that contribute to a family’s total income. In my opinion, Basic Allowance for Subsistence (BAS) and any form of housing or housing allowance are both clearly income to a family. You may not agree with me, and I’d be glad to hear your logic. Both BAS and BAH/OHA are payments being made to a service member, and if you are living in government-owned quarters, you are not having to pay your housing expenses from your income.

Housing allowances can vary dramatically, but we’ve got to use something. For my math, I’m going to use the housing allowance rates for Fort Chaffee and Fort Smith, Arkansas, because it is almost the lowest in the country. I’m also going to use the with dependents rate, because no single soldier, sailor, airman or Marine has income less than the poverty level if you include the value of housing and BAS. The BAH rates for the selected area are:

BAS is $352 per month for enlisted servicemembers, and $242 per month for officers. Since I don’t think very many people are arguing that officers are living below the poverty level, I’m just going to use the enlisted BAS rate. $242 per month, times 12 months a year, equals $2904 per year.

A single servicemember, brand new to the military, with a rank of E-1 and having less than four months of active duty service earns $1,402 in base pay each month. We don’t even need to add the value of housing and meals, because that equals $16,824 per year.

As explained in the single servicemember analysis, even the newest recruit earns $16,824 per year in base pay. Even if you add a spouse, you don’t need to include BAS or BAH to exceed the poverty level. If we did include BAS and BAH, that brand new E-1 would earn $28,944. (Yes, I know that he or she would still be in training. Work with me here, people.)

With these higher levels, I’m going to work backwards because it is easier. The first four ranks are bringing in $2,904 in BAS each year, plus at least $9,216 in BAH each year. Together, that equals $12,120 of yearly income before you even get to pay. Subtracting that from the federal poverty level of $19,530 means that the service member would need to earn at least $7,410 in pay in order to not be below the federal poverty line. Given that an E-1 under four months is earning $16,824 in pay, there are no families of three that are living below the poverty level.

As we’ve established in the math above, a new military member is receiving at least $28,944 in pay and allowances. Therefore, an E-1 with less than four months of service who has a family of six is receiving income below the federal poverty level for their family size. However, it isn’t long before that E-1’s income increases above the federal poverty level. Doing the math backwards again, take the federal poverty level of $31,590 for a family of six and subtract the yearly allowances of $12,120, that service member needs to earn $19,470 in annual base pay.  Divided by 12 months, that would require a monthly base pay of $1622.50. Checking the 2013 Military Pay Chart, you can see that E-2 of any service are earning $1,699 per month.

I’m sure there will be comments- let me have ’em!