The guest post was written by my friend Miranda Marquit: 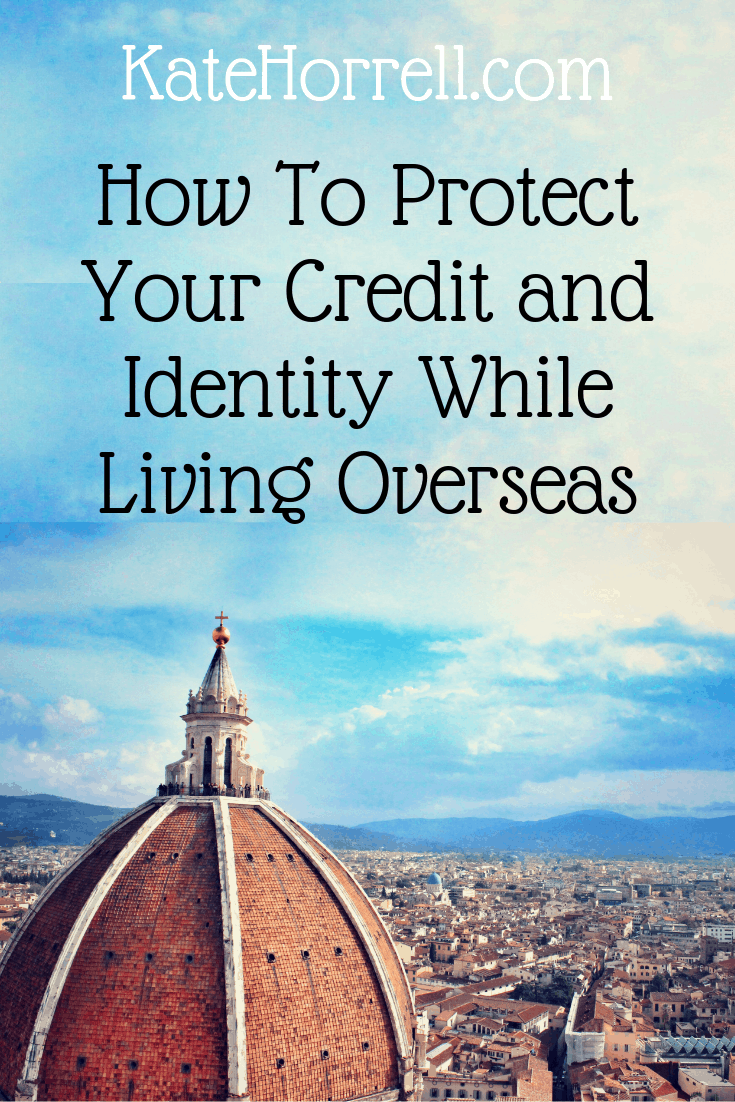 Today, there are many reasons to live overseas for an extended period of time. You might work for a U.S. company with offices around the globe, or you might even take a job with a foreign company. Many military service members are posted at the many military installations located in other countries.

Living abroad, whether you are gone for a few months or several years, means that you might be vulnerable to identity thieves who can compromise your credit. If you want to reduce the chances of fraudsters stealing your good name and ruining your good credit, you need to remain vigilant – no matter where you live.

Getting your credit ready for your move

Many consumers don’t think about notifying their credit and debit card issuers that they are moving out of the country, according to Beverly Harzog, a credit expert and the author of The Debt Escape Plan. However, it’s important to let your card issuers know that you are leaving the country. You don’t want your cards flagged as stolen the first time you use them overseas.

Also, be prepared for the possibility that you may not be able to use your card in some circumstances. The chip and PIN card is the standard in many countries, Harzog points out. While more U.S. credit card issuers are moving toward cards with smart or EMV chips, they are far from universal, and most U.S. cards with chips require a signature rather than a PIN.

Even though your magnetic stripe card, still common in the U.S., will be accepted in most cases, as will be a chip and signature card, there are still times when a chip and PIN card is necessary, such as at unmanned train ticket kiosks. Contact at least one issuer and ask if you can be issued a chip and PIN card so that you have an option that will work no matter what.

In some cases, such as a short-term overseas deployment or temporary corporate assignment, you might plan to return to the U.S. after a few months. In these cases, you might still have regular obligations in your home country. Harzog suggests setting up automatic bill pay, or setting up electronic access to your accounts so you don’t miss your payments. Missed and late payments while you are absent can result in poor credit.

If you will be gone for years, make sure loose ends are taken care of. I have friends who have left for two or three years to serve missions overseas with their families. They usually enlist someone they trust to rent their homes while they are gone. These arrangements require the missionaries to continue making mortgage payments (usually through automatic withdrawal) and collecting the rent from their tenants electronically. Consider the arrangements you need to make, whether it’s paying to store your things until you return, or whether it’s selling most of your things so that you don’t need to worry about them.

Protect your identity while overseas

“When you are overseas for a long period of time, you likely aren’t keeping an eye on your credit reports,” says Becky Frost, a senior manager of Consumer Education at Experian. “This means you are less likely to notice if an identity thief has opened new accounts in your name.”

You need to stay on top of your identity while living overseas, since your information can be used for purchase and tax scams. Fraudulent accounts opened in your name during your absence can drag down your credit and cause problems when you try to return to your American life after the end of your stint abroad.

Both Frost and Harzog suggest using AnnualCreditReport.com to request the credit reports you are entitled to each year. Being out of the country doesn’t preclude you from obtaining this information. They also say you should consider using a credit monitoring service or placing a freeze on your account during your absence.

Members of the military have a special option: an active duty alert. “This prevents anyone from opening an account in your name while you’re gone,” says Harzog. “Contact one of the three major credit bureaus to get the ball rolling.”

Don’t wait until you return home to protect yourself. “Most people review their information after moving back to the States,” says Frost, “but fewer take precautions before and during time overseas to protect their identity and their credit.”