While it is important to review your military Leave and Earnings Statement every month, it is extra important whenever you have changes, such as a Permanent Change of Station move, a promotion, a time-in-service or regular annual raise, or any other action that could impact your pay and allowances.

While these events can occur any time of the year, January is a big one for everyone in the military. An annual pay raise and increase in Basic Allowance for Subsistence kicks in, plus BAH and other allowances may change. And this year, there will be changes to Social Security tax withholding. Regular Social Security tax withholding will resume after the deferral in September through December of 2020, and repayment of the deferred taxes will begin. There’s a lot going on.

And, several people have reported that their leave balances are messed up on these January 2021 LES.

So, here are the main things you want to look for in reviewing this specific LES:

Increase In Base Pay and BAS

All military service members received a 3.0% increase in their base pay for 2021. Basic Allowance for Subsistence rates have increased for all service members, too.

Many locations and ranks will receive more for BAH in 2021. Don’t worry if your location’s BAH rate went down – you are probably covered under the BAH rate protection rules.

Those Social Security taxes that weren’t withheld in September through December of 2020 didn’t go away – we’ll repay them this year. Originally, they were to be repaid over four months, but a recent change has extended the repayment period to 12 month. That means you should be repaying 1/12 of the total amount deferred each month. You should see this in two places on the LES.

On your LES, you should see a “MISCELANEOUS DEBT” in the deductions column. (Yes, it is spelled wrong.) This is the repayment towards your deferred Social Security taxes for 2020. You’ll also see the regular withholding listed as FICA-SOC SECURITY. 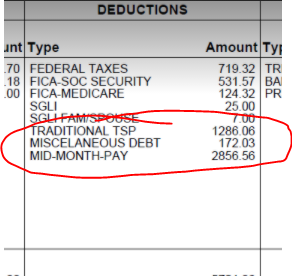 You’ll also see an explanation in the remarks section in the bottom part of your LES, showing the total amount of taxes that were deferred, the monthly repayment for this LES, and then the remaining balance. It’ll look like this:

Marine Corps: The Marine Corps, of course, has to be special. (Did you know I was raised by a Marine? I have a little soft spot for the scarlet and gold.) Here’s what it looks like on their statement:

Thank you to the reader who shared this with me!

Several people have commented to me that their leave balances, particularly the use-or-lose balances, were wonky on their January LES. I’d probably let this one go until February and see if it sorts itself out.

It’s always important to check your Leave and Earnings Statement each month, but this month is extra special. Take three minutes and make sure that everything looks right. It could potentially save you a lot of trouble in the future!