The world of financial education lost a great mind this weekend. Thomas J. Stanley, author of The Millionaire Next Door and numerous other insightful, research-based books, was killed in a car accident on Saturday. 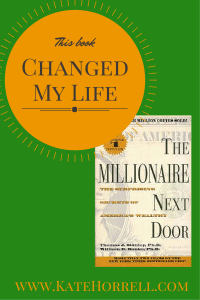 Stanley was known for using research to smash stereotypes about millionaires, and this showed people the type of behavior that was actually likely to result in financial success. The Millionaire Next Door was Stanley’s most basic book about millionaire behavior. First published in 1996, it inspired thousands of people to change their behavior and take positive steps towards accumulating wealth.

The Millionaire Next Door was a significant turning point in my journey towards financial freedom. It’s a little bi-polar. On one hand, the book is full of statistics and complicated examples and feels a little textbook-y. However, there are also very readable sections and case studies that make it all easy to understand.  Here are the two main things I learned from The Millionaire Next Door:

Wealth Is Not What You Spend, It’s What You Accumulate

Accumulation of wealth is one of the key themes in Stanley’s books. He’s got all sorts of formulas and names for different groups based upon how much of their income they’ve saved, but the short version is this: most people who have a lot of money don’t spend a lot of money. Instead, they’ve saved and invested and built ways to create income.

The Millionaire Next Door caused me to rethink my priorities and critically analyze my spending. Most importantly, it challenged my perceptions about people who look wealthy:  people with fancy cars, big houses, and expensive toys. Prior to reading Stanley’s books, it never occurred to me that owning expensive things didn’t necessarily mean that the owners had a lot of money.

Stanley spends a lot of time talking about the ways that his studied millionaires didn’t spend money. They didn’t have flashy clothes, new cars, or huge mansions. They made practical purchases and followed careful spending plans.  Stanley also talks about the relatively small incomes that many of his subjects earned each year, emphasizing that these weren’t all families with huge paychecks to save.

As a military family, this insight was huge. We’re never going to have super-high income.  But we can be frugal, cut costs, and make good choices, using the money we’ve saved to build up savings and investments. We can avoid extravagant purchases and select more sensible options for homes, vehicles, and clothing.

While I am sad to hear of Mr. Stanley’s death, I am thankful for the valuable research and analysis that he shared with the world. I think it is safe to say that my journey to financial stability would not have been so smooth without the things I learned from his books.