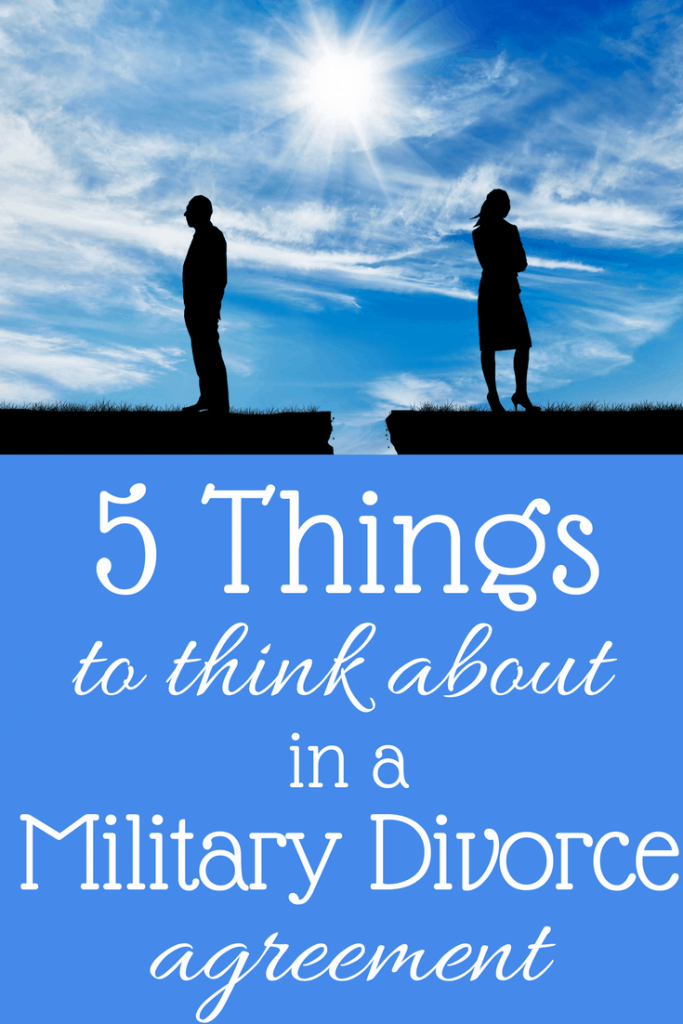 While a divorce is essentially a civilian matter, there are certain aspects of military pay and benefits that need to be considered when dealing with a marital separation or divorce where one or both members are in, or retired from, the military. All too often, I hear from one party who got the short end of a divorce.

Usually that happens by accident and because the two parties and their lawyers didn’t have a thorough knowledge of the things that had to be considered. But it’s not always by accident: sometimes one party in a divorce is really determined to leave the other party with nothing, or a lot less than is appropriate given the circumstances. And that’s just not right. Either way, it is super important that you understand the issues and the rules and you do what you need to do to take care of yourself and, more importantly, your kids.

The big thing to remember is that the divorce is not run by the lawyers, or by the judge(s), unless the two parties who are divorcing can’t agree. I’ll tell you that in 98% of the cases, the outcome is going to be faster, cheaper, and better if the divorcing spouses work this stuff out between themselves and don’t let their lawyers fight it out. I’m not sure how we got to the point where letting the lawyers handle the divorce seems like the norm, but it shouldn’t be. If working together is hard, then the first step should be a mediator to help the two parties come to a mutually agreeable solution. I’m not saying you don’t need a lawyer – you absolutely DO need a lawyer – but the lawyer should be the last-stop, look-it-all-over, not the hash-out-every-detail.

Obviously, there is a lot of stuff that needs to be considered, including custody of the children, child support, who will live in the house, who gets the iTunes account, etc. I’m just here to talk about things that are unique to the military.

If I had to pick one thing that former military member and former military spouses most often regret, it is something that was decided in their property settlement. Often, important details are overlooked either because the two parties are in a hurry to get the divorce over with, or because one or both the parties and/or their lawyers didn’t consider all the little things.

Any division of marital property in a divorce should consider all the assets and debts of the marriage, including but not limited to:

The goal is to come up with a plan that is fair to both parties. Finding a compromise between the two parties can take time and patience, but the resulting property settlements reflect the priorities and unique situation of the two people divorcing. That’s the goal here.

When the couple can’t work together, then it becomes necessary to involve lawyers and judges. This makes the process slower, more expensive, and can result in some undesirable outcomes. However, don’t be afraid to take this route if it is necessary. Don’t accept an unacceptable settlement just to get it over with, or because your soon-to-be-former-spouse bullies you into it. Sadly, this happens ALL.THE.TIME.

When working out a property settlement, you should consider a number of different factors:

Getting The Division Of Military Retirement Pay Right

If the couple, or a judge, decide it is appropriate to divide earned military retirement pay, it is important that the directions are written to actually direct the intent of the division of pay. If you don’t consider all the nuances, it can be easy to mess this up. Thankfully, the Defense Finance and Accounting Service (DFAS) offers a sample order that can be used to draft your individual paperwork correctly.

It’s also important to note that any new divisions of military retirement pay are subject to the rules change set forth in the 2017 National Defense Authorization Act. Under these changes, the division of retirement pay must take into consideration the rank and time in service at the time of the divorce – not the total amount of retirement pay that is eventually paid.

Once again, there is no requirement that military retirement pay be divided, and there’s no set formula in the federal law. States may have a formula that they generally use, but even a state formula is just a starting point. It is up to the two parties, or, if they can’t decide, the judge that handles their case.

If a division of marital property is ordered, and the couple has been married at least 10 years that overlapped with 10 years of military service, then the payment can be made directly from the DFAS. If the marriage had not lasted 10 years, or did not overlap with military service by 10 years, then any ordered payments must be paid by the retiree.

For longer marriages, it is important to understand the long-term implications of the 20/20/20 rule. The 20/20/20 rule provides Tricare medical, shopping and other base benefits to former spouses who meet all three of the following criteria:

Spouses who remarry lose their 20/20/20 benefits. Medical coverage is lost permanently; shopping and other benefits may be reinstated if the subsequent marriage ends due.

Because of the value of these benefits, particularly the Tricare medical coverage, divorcing couples who are nearing this threshold may want to delay the actual divorce. Depending on details of the couple’s situation, it might even be worth “giving up” something else in order to reach this milestone.

There is a modified benefit, called the 20/20/15 benefit, for spouses who were married for 20 years, whose sponsor served for 20 years, but whose marriage and military service overlapped for between 15 and 20 years. Under the 20/20/15 rule, the former spouse retains Tricare medical coverage for one year after the date of the divorce. Again, couples may want to consider the timing of the divorce if this coverage is important.

The Survivor Benefit Plan (SBP) provides income to a designated person after the death of the military retiree. SBP permits a former spouse to be covered as an SBP beneficiary, either voluntarily or as designated in the property settlement agreement or divorce decree. Depending on the particular situation, SBP coverage can be a valuable and important part of the overall package.

Be sure to consider former spouse SBP coverage as part of the overall settlement agreement, and put whatever is decided in writing in the divorce decree or property settlement. Be sure to inform DFAS within 1 year of the court order so that coverage can be appropriately applied.

Former spouse SBP is important in many situations, but it is essential if you have special needs kids. They need their surviving parent to be financially secure to take care of them in the best way possible.

If either party in the marriage has debt, address it during the divorce. Keep in mind that creditors are not obligated to adhere to the terms of the divorce decree: just because a divorce decree says the debt belongs to one person does mean that the creditor can not enforce the other party’s obligation. If at all possible, pay off all debt together before dividing the other assets. If that is not possible, refinance or otherwise restructure the debt to be the individual responsibility of the person who is assuming the debt in the divorce. This will prevent any chance of an awful situation in the future.

If a military member has transferred Post 9/11 GI Bill educational benefits to their spouse, that transfer is not cancelled if the couple divorces. Under federal law, however, GI Bill benefits can not be “divided” in a divorce. However, that doesn’t mean that the couple can’t come to an agreement with regard to the benefits, and base other decisions around that agreement. In this case, the receiving party may want to have contingencies built into the property and support agreement in case the military member decides to revoke those GI Bill benefits after the divorce is completed.

Highly mobile military families may face challenges when organizing child custody and visitation issues. Be sure to address the parents’ rights to take the children to different locations, any times that might be unacceptable, and who will pay for the transportation. Remember that visitation wishes may change as the children get older, and may vary depending on the location of the two parents. (An every-other-weekend plan may seem great when you live two hours apart, but what happens when you live across an ocean?)

This article is not meant to replace the advice of a good lawyer with experience helping military couples through a divorce. The two main points that you should take from this article are: a) it’s your divorce – you get to set the terms, unless you choose to let the lawyers fight it out or let it go to a judge, and b) there are several issues that are unique to military families, and you need to be sure they’ve all been addressed.

Divorce isn’t fun, but it can be a lot less difficult if you understand what you’re doing.