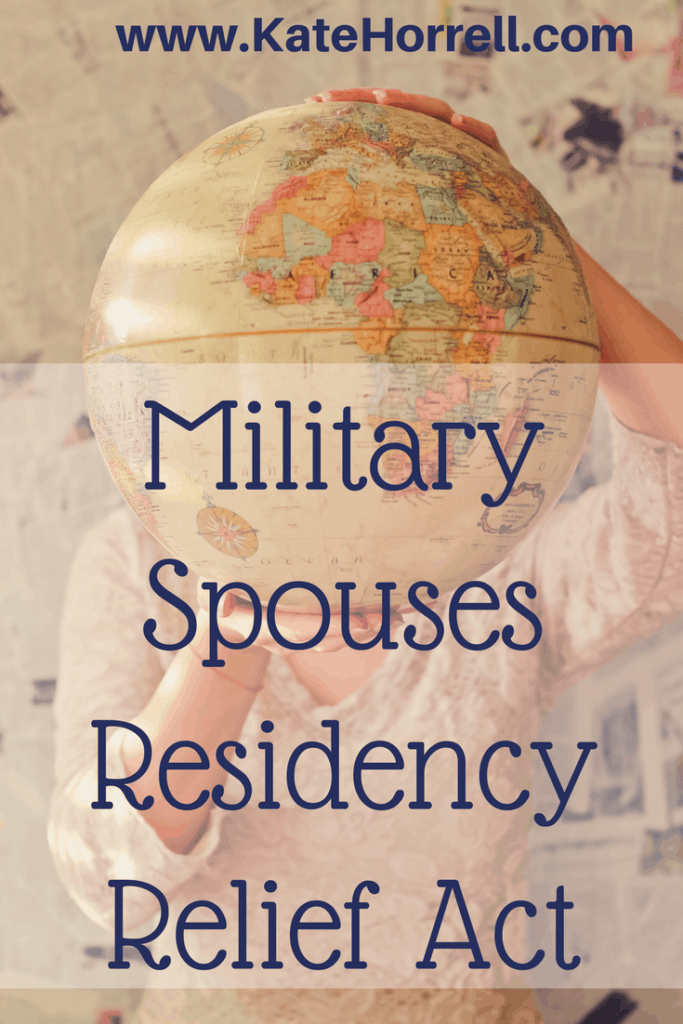 Passed in 2009 and then amended in 2017, the Military Spouses Residency Relief Act  offers military spouses certain protections while moving around on Permanent Change of Station (PCS) orders. It’s important to understand that MSRRA isn’t free-standing legislation – it is amendments to the Servicemember’s Civil Relief Act. The legislation is actually SCRA, MSRRA is just the way it was changed.

Unfortunately, it is an imperfect piece of legislation. It doesn’t address many of the issues that military spouses would like to see managed, such as what to do if you can’t establish residency in the same state as your spouse, or driver’s licenses, etc.

I’ve highlighted two different things. In bold is the text that is important with regard to taxation. In blue is the part that requires that the military spouse share the same domicile as the service member in order to qualify for protections under this act.

Here is the text:

AN ACT To amend the Servicemember’s Civil Relief Act to guarantee the equity of spouses of military personnel with regard to matters of residency, and for other purposes.

SECTION 1. SHORT TITLE.
This Act may be cited as the ‘Military Spouses Residency Relief Act’.

SECTION 2. GUARANTEE OF RESIDENCY FOR SPOUSES OF MILITARY PERSONNEL FOR VOTING PURPOSES.

(2) by adding at the end the following new subsection:
‘(b) Spouses- For the purposes of voting for any Federal office (as defined in section 301 of the Federal Election Campaign Act of 1971 (2 U.S.C. 431)) or a State or local office, a person who is absent from a State because the person is accompanying the person’s spouse who is absent from that same State in compliance with military or naval orders shall not, solely by reason of that absence–

(3) in the section heading, by inserting ‘and spouses of military personnel’ before the period at the end.

(b) Clerical Amendment- The table of contents in section 1(b) of such Act (50 U.S.C. App. 501) is amended by striking the item relating to section 705 and inserting the following new item:

SECTION 3. DETERMINATION FOR TAX PURPOSES OF RESIDENCE OF SPOUSES OF MILITARY PERSONNEL.

(A) by striking ‘A servicemember’ and inserting the following:

(B) by adding at the end the following:

(3) by inserting after subsection (b) the following new subsection:

(B) in paragraph (2), by inserting ‘or the spouse’s’ after ‘servicemember’s’.

(b) Application- Subsections (a)(2) and (c) of section 511 of such Act (50 U.S.C. App. 571), as added by subsection (a) of this section, and the amendments made to such section 511 by subsection (a)(4) of this section, shall apply with respect to any return of State or local income tax filed for any taxable year beginning with the taxable year that includes the date of the enactment of this Act.

(a) In General- Section 508 of the Servicemembers Civil Relief Act (50 U.S.C. App. 568) is amended in subsection (b) by inserting ‘or the spouse of such servicemember’ after ‘a servicemember in military service’.

(b) Application- The amendment made by subsection (a) shall apply with respect to servicemembers in military service (as defined in section 101 of such Act (50 U.S.C. App. 511)) on or after the date of the enactment of this Act.

If this law applies to you, it is important to know what it does and does not cover. There is a LOT of misinformation available on the internet, even from official sources. It is your responsibility to ensure that you truly understand the law if you are going to use it as the basis for preferential treatment in any situation. Reading the Act is the best way to know what it actually says.