This post has most recently been updated on 4 February 2019. 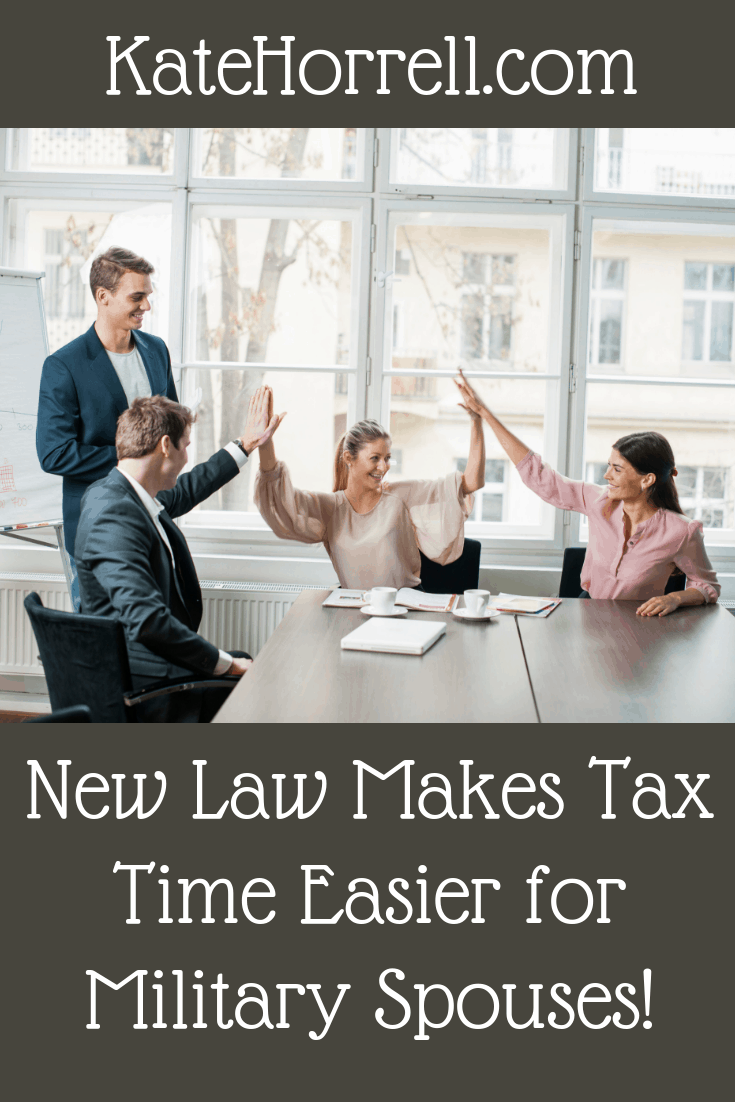 The president has signed the a bill that permits military spouses to use the legal residence of their service member for purposes of taxes (and voting.) S. 2248 (115th): Veterans Benefits and Transition Act of 2018 has a provision that states:

As often is the case, this new legislation creates more questions than it answers. And, of course, it was passed at the very end of 2018, meaning that we need to figure out the answers ASAP in order to file 2018 taxes.

But first, a little background.

What This Law Does

This law (assuming no one challenges the poor wording) permits the spouse to use the legal residence of the active duty service member, for purposes of taxation and voting.

Well, the first reason we care is because the old law only helped some spouses.

The second reason is because this makes life soooooo much easier. No more having to figure out whether you’ve moved to a “same state” state or a “whatever state.” Don’t know what I mean? It doesn’t matter, because this law makes that problem go away.

The Problems With This Law

There are numerous issues that aren’t addressed in this law, and there are some constitutional question.

First, there is the question of the federal government’s right to tell states who can be residents there, even if it is only for the purposes of taxation and voting. It seems a stretch for the federal government to be able to tell states, “Hey, let this person vote in your state,” when the person in question may never have even set foot in that state.

Second, voting and taxation are the two main indicators of legal residence. If you let someone pay taxes (or not pay taxes) and vote in your state, doesn’t that make them a legal resident of that state?

Most importantly is the question of whether states will start looking more closely at the service member’s state of legal residence, whether it was legitimately established, and whether the service member has been consistent in demonstrating his or her intent to keep that state as their legal residence. We all know service members that are claiming one state as their legal residence, but titled and registered their vehicle in a different state, and maybe vote somewhere else. I’ve long held that states would increase their cracking down on such behavior, particularly as states are seeking new revenue and technology makes it easier to cross-reference individual actions. It makes sense that a state who is going to lose the revenue of a military spouse, as well as the service member, would ask for “proof” that the service member is actually a resident of the state they are claiming. There have always been some cases, but I think they will increase with this new law.

Questions We Don’t Have Answers For

What do I do about the state taxes that have already been withheld for 2018?

In theory, you’ll file a non-resident return requesting a refund of those taxes based upon your filing in your spouse’s state of legal residence.

Can I get a driver’s license in my spouse’s state of legal residence?

This law contains no provisions for obtaining a driver’s license. However, the law is brand new. What typically happens when a new federal law impacts states is that the states come back with their own laws to comply with the federal law. Sometimes, the new state law is even more generous than the state law. It’s possible that some states will just say, “Hey, military spouses, do whatever you need to do for residency here.” But we don’t know yet.

What The Professionals Are Saying

The various branches are using an information paper produced by the Department of the Army Judge Advocate for Legal Assistance (DAJA-LA, for short).

The key relevant point in the information paper states this:

“pursuant to Section 302(b), spouses can make this election for state and local returns for taxable year 2018 filed in the 2019 income tax filing season.”

I encourage you to read the entire paper. It’s interesting.

Fingers crossed, there will be no challenges based on the way the law was worded, and this will work exactly as planned, and tax time will be SO much easier!