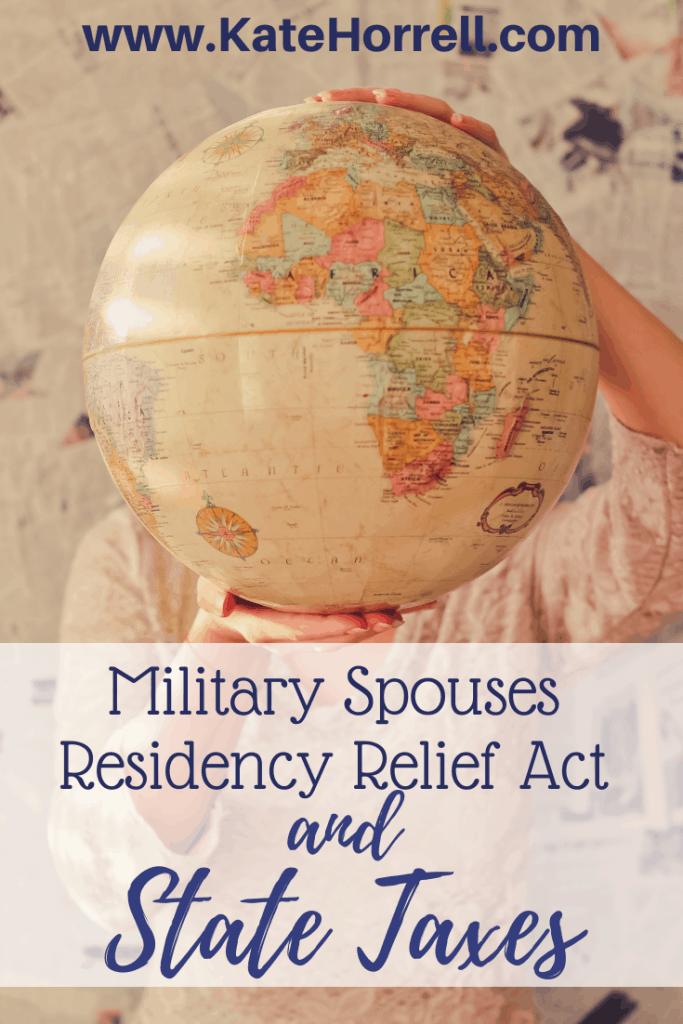 MSRRA amends SCRA in a couple of ways. There are three main parts that are important to the majority of people.

Voting:  A military spouse may not be prohibited from voting in federal, state, or local elections if he or she is residing elsewhere due to the spouse’s military orders. For example, if a spouse is a legal resident of Tennessee, Tennessee can not prevent them from voting in Tennessee elections if they are living in Virginia on PCS orders.

Land Rights:  There is a part that pertains to the rights that residents of certain areas have with regard to public lands.  This might include mining rights or homesteading rights. This is a tiny, tiny portion of the population, and you would know if it applies to you.

What SCRA Now Means For Spouses and State Taxes

2. A military spouse may use (“borrow”) their active duty service member’s state of legal residence for purposes of voting and taxes without actually establishing legal residence there.

What MSRRA Does Not Say

MRSSA/SCRA is noticeably silent on several issues of importance to military families.  However, you will find people who will tell you that MSRRA somehow offers these protections. Unless you can find it in the law, it’s not in there.

MSRRA/SCRA does not say anything about vehicle registrations, inspections or insurance.

MSRRA/SCRA does not have any provision for establishing a domicile in any location, except via the regular process that generally includes being physically present in the state.  It does not require states to permit a military spouse to obtain the domicile of the service member without fulfilling the requirements, nor does it permit a military member to pick a state without fulfilling the requirements.

How MSRRA Works With State Laws

This is the truly tricky part about MSRRA, but it’s not actually about MSRRA. It’s about state laws.

Sometimes, this is just an act of kindness, but often it is due to misunderstanding of what the MSRRA/SCRA actually says, or sometimes even just poorly worded laws. For example, a state may permit a military spouse to not become a legal resident when moving there when they don’t share the same state of legal residence as their active duty service member. People often claim that generous state laws are actually protections provided under MSRRA.  This can cause a lot of confusion!

I encourage you to read and understand the MSRRA law so that you can benefit from its provisions without accidentally trying to do something that it doesn’t permit.  If you are ever in doubt about it, the legal services office on a base in the appropriate state should be able to give you guidance about MSRRA and any applicable state law.

The benefits in the MSSRA amendment to the SCRA are a great blessing for those who can benefit from them, but it isn’t the blanket rule that many people would have you believe.  It has very specific protections and situations in which those protections apply.  Understanding it is key to using it properly.

Military spouses don’t have a home of record, because a home of record is nothing more than the place where a service member joins the military. In 99% of cases, when someone is talking about their home of record, they actually mean their state of legal residence. The two may be the same state, but they’re not the same concepts.

SCRA permits military spouses to use their service member’s state of legal residence for purposes of voting and taxation, but it does not guarantee the right to be granted legal residence in the state.

Just because you did something before, and nothing bad happened, doesn’t mean that’s what the law says. I speed more than I should admit, but that doesn’t change the speed limit. Same for your friend or neighbor who filed in wherever and no one audited them. States can and do challenge legal residence in certain cases. If a state challenges your legal residence, do your actions (voting, maintaining driver’s licenses, the state declared on your will, vehicle registration, paying taxes) demonstrate your stated intent?

I encourage you to read and understand the SCRA law so that you can benefit from its provisions without accidentally trying to do something that it doesn’t permit.  If you are ever in doubt about it, the legal services office on a base in the appropriate state should be able to give you guidance about SCRA and any applicable state law.

The benefits of the MSSRA amendment to the SCRA are a great blessing for those who can benefit from them, but it isn’t the blanket rule that many people would have you believe.  It has very specific protections and situations in which those protections apply.  Understanding it is key to using it properly.