Last month, NPR republished a story on how the military doesn’t have much control over the system that handles moving household goods of service members who receive Permanent Change of Station (PCS) orders.  I think we’d all agree that is a relatively true statement.  Or complete understatement.  Either way.  The generally consensus is that the military moving system is pretty bad all around, from the contracting to the actual moves to the claims process. 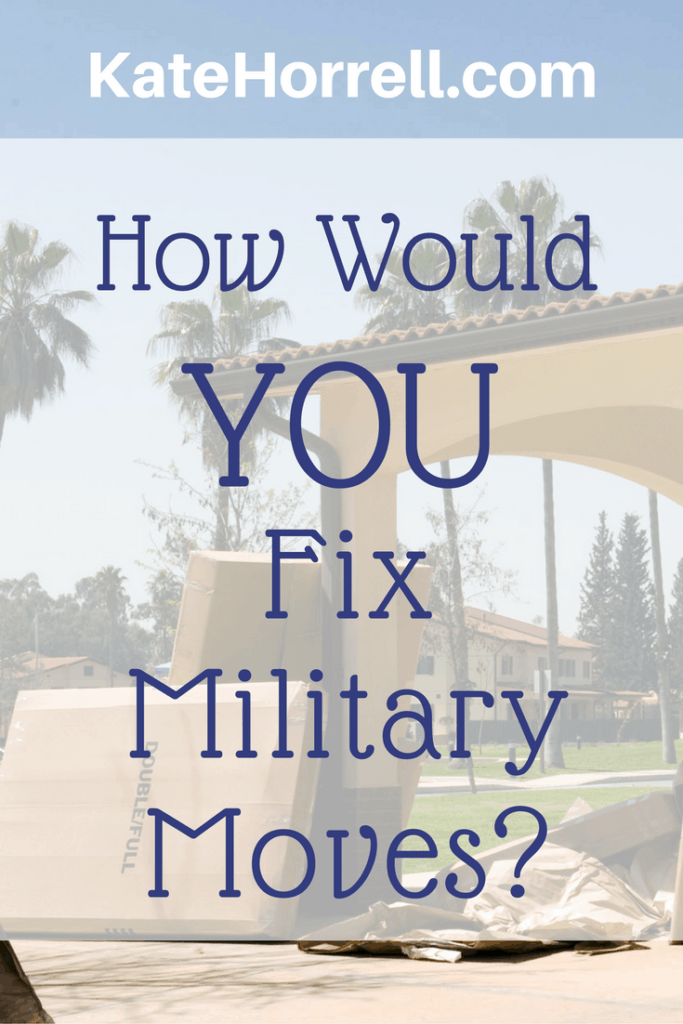 Unfortunately, I don’t have any solutions to the big, systemic problems in the military household goods process.  However, I have a solution to one small portion of the situation, and I’d like to know what you think.

Under the current system, each service member is allotted a certain allowance of weight for their household goods.  If they exceed that allowance, they are responsible for paying the extra cost.  However, there is no incentive to have a weight that is lower than your allotted amount.

The military spends over $4 BILLION dollars each year for PCS moves.  In many cases, military members are moving stuff that doesn’t need to be moved, because there is no incentive to downsize below your allotted weight.  I’m sure it isn’t a straight-line calculation, but what if every service member were able to decrease the weight of their shipment by 10%?  Would that save $400 million dollars?  It might, and that’s a lot of money.

Ten percent sounds like a lot.  What would that look like in your family?  In my family, that might mean throwing away those bookcases that probably aren’t going to survive the next move anyway, and paring down some of those old paperbacks that haven’t been read in years.  Or finally pitching these sofas.

Even if the military paid families half of the shipping costs saved, the military would still cut their PCS costs a LOT.

Cash payments for being significantly below your allotted weight could be used for a variety of purposes.  At first, I envisioned that military members would use the money to replace questionable items that were discarded before the move.  For example, if a military family owns a sofa that is near the end of its useful life, they would have incentive to get rid of it before the move, and they’d have some money towards a replacement at the new home.  I know that I would be more ruthless in my purging if I were being compensated for downsizing.

The money could be used for other purposes, as well.  Paying off debt, saving for retirement, enjoying a vacation – anything is better than spending it on shipping something unnecessarily.

Do It With Cars, Too

This would be a particularly big benefit on those moves where the shipping is complicated.  When we moved from Hawaii to Australia, our car went from Hawaii to the mainland, then to Korea, before heading Down Under.  Then it did the reverse two years later.  We may have considered another option if the military had offered us a couple of thousand dollars NOT to take the car with us, but it wasn’t financially viable for us to sell in Hawaii, then buy in Australia, sell in Australia, and then buy again when we returned to the United States.

This is a third area where the Department of Defense could save a LOT of money.  We recently had an unusual situation where our storage shipment was no longer paid for by the government, and we started paying for the storage.  It was nearly $1,000 per month.  It was nearly 14 crates of stuff, but still.

It’s not uncommon for military members to have consecutive overseas tours and for their storage shipment to be stored for five years or longer.  Let’s imagine that a family moves overseas and puts just one crate into storage.  They come back to the United States after two overseas tours, and that crate has been stored for 72 months.  Even if it is “only” $100 a month for storage, the government has spent $7,200 to store that crate.   While sometimes that storage stuff is unavoidable, some of it is unnecessary.  It’s especially unnecessary if the member could have cash reimbursement for not storing the items.

A small, but very relevant, example would be when a family stores just their 110 volt household goods because they move to a country where the electricity is 220 volts.  Let’s say that includes a washer and dryer, refrigerator, TV, DVD player, game console, and a kitchen full of appliances.  That’s probably roughly a crate, or close enough that it would fill up a full crate.  In our scenario above, if the government split the savings 50-50, the military member could choose to store those items or they could choose to sell them before moving, netting some cash at the time, and then receive cash that could be used to purchase new items when they returned to the US.  The government would save money, the person who bought the items would benefit from being able to buy used appliances, and the military member wouldn’t have to worry if their items were still going to work after being stored.

I’m curious – would a plan like this appeal to you?  Would you be encouraged to purge more before your move if you knew that you could make a little money off of it?