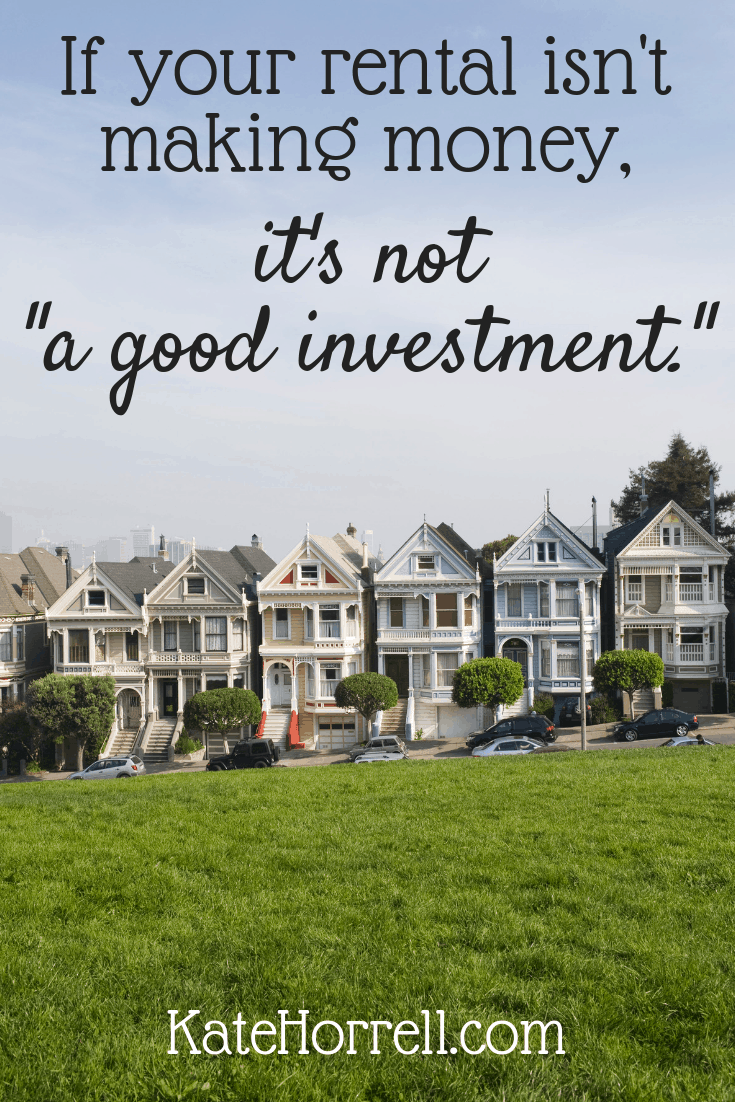 As a financial educator, and a military landlord myself, I spend a lot of time talking to military families about their rental houses. In almost all cases, these are houses that the family bought at a duty station, and then rented out when they PCSed away from the area. Maybe that was the plan all along, or maybe they couldn’t sell when they moved. There is one common thing that many military landlords say that makes my ears perk up, and not in a good way:

“We’re not making any money, but it’s a good long-term investment.”

There are 1,000 variations on this phrase, and I’ve heard it at least 1,000 times. And I just want to scream: “It’s not an investment if you’re not making money!”

I don’t scream. Often, I don’t say anything at all. But it pains me, truly, to hear so many people deluding themselves into thinking that it makes financial sense to own a property that isn’t making any money.

I understand the logic. If you buy a house, and you have renters pay your mortgage each month, then in 30 years you have a “free” house – right? It certainly sounds good when you say it. Unfortunately, this logic doesn’t consider several important factors.

Let’s say your total expenses are $200 a month more than the amount of rent you can reasonably charge. If you took that $200 per month and invested it, earning 6% interest, after 25 years you would have over $141,000.

Even if you are breaking even each year on the property, you still have a lost opportunity cost on the money you have invested in the property. Depending on your situation, this money could be very little, or it might include a down payment, the cost of improvements you’ve made, and/or any appreciation that has occurred. If the property isn’t making as much profit as you would make by selling and putting that money into an investment, then you’ve got a loss there.

Capital gains taxes can be avoided by military families, as long as they meet the criteria, but that option expires after leaving the military or after the house has been a rental for a certain period of time, often 13 years (based upon the military extension of the capital gains exclusion.) Most taxpayers are in the 15% long-term capital gains bracket, meaning they’ll pay a 15% tax on the increase in the property’s value. (It’s obviously a little more complicated than that, but that’s a good place to start your math.) If you own a house for 25 years, and it appreciates by $141,000 (the amount you would have earned if you’d invested it), you’ll owe $21,000 in taxes on that profit.

Less known, but potentially more expensive, is the depreciation recapture tax. Each year that you own an investment property, you will depreciate its value and deduct that depreciation on Schedule E of your tax return. That’s weird, because depreciate means to reduce the value of something, but you claim that depreciation regardless of whether the house’s value changed, and you claim that depreciation even if the property’s value increased. However, when you sell the property, any amount of that depreciation that isn’t “realized” (meaning that your property didn’t actually lose value) becomes taxable. It’s a complicated formula, and it ties into your capital gains, but a rough estimate that’s good for most people is 25%. So that means that if you depreciate your property $10,000 each year, and you rental it out for 20 years, you’ll owe roughly $50,000 in depreciation recapture taxes when you sell. That’s $2,500 per year, or over $200 for each month that it’s a rental.

Exposure to Loss and Liability

There are literally millions of things that can (and do) go wrong with rentals. Whether it’s tenants who trash the place, or the discovery of asbestos tile under the carpet in the family room, or a hurricane, or a tanking housing market, every day that you own a home, you’re exposing yourself to loss and/or liability. And that’s fine, but be sure that you’re being realistic about the what-ifs.

That Doesn’t Mean You Shouldn’t Become A Landlord

Now, there may be some semi-good reasons to hold on to a home that is costing you money. Perhaps it is a great house, in an area where you’re likely to return, and it’s OK that you aren’t making money on it right now. Maybe you are absolutely, positively sure about where you will retire, and you bought a house there and you’re willing to shell out a little each month to have that house in the future. But even in those situations, you should have a true understanding of what that house could cost you so that you’re making an educated decision and not just blindly throwing money. If you’re not considering opportunity cost, long-term tax consequences, and exposure to loss, then you don’t have any idea whether your investment property is actually a good long-term investment. And if you’re not making at least a small profit each month, you’re definitely not covering the opportunity cost and the tax liabilities.

Please, please: if you own a rental property, sit down with a financial professional to be sure that you completely understand all the short-term and long-term consequences of owning that property.