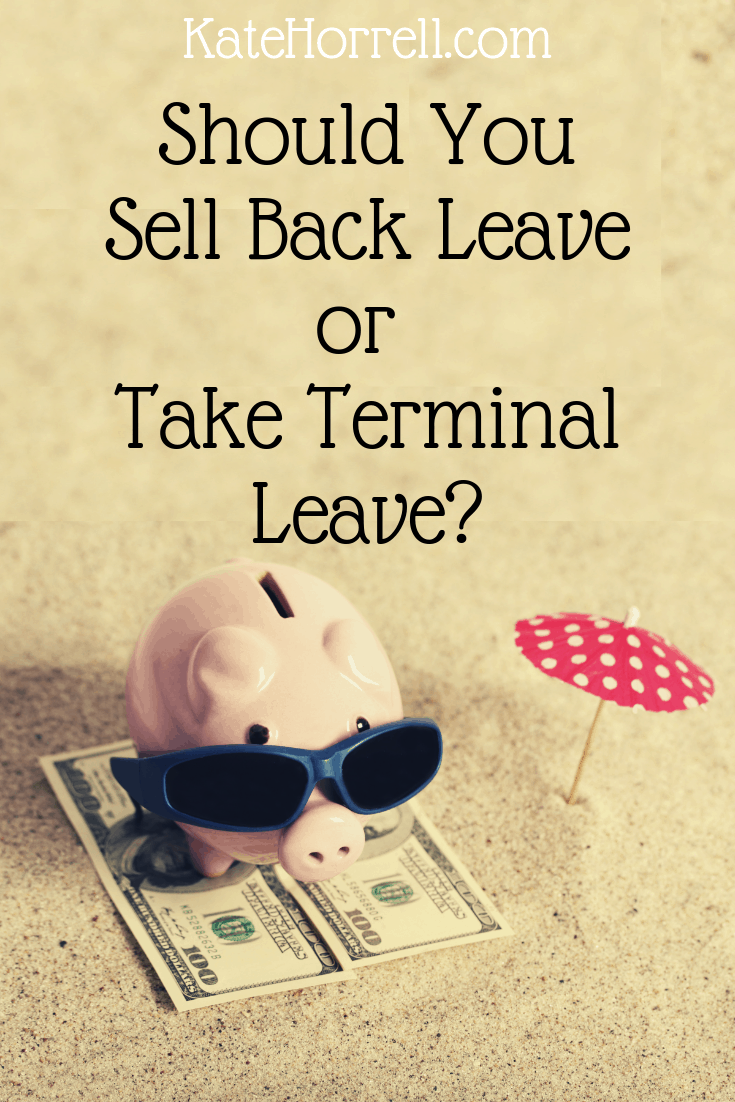 One hot topic in military finance is the selling of leave. Generally, these are folks who are separating or retiring, and they’re trying to figure out what to do with their leave. I used to have a single answer, and then I opened my mind a little, discovered that there are a lot of variables to consider. As usual, the final answer is: there is no right answer for every situation.

This post is part of The Comprehensive Military Retirement Checklist. Be sure to read all the other posts that go with the checklist, too!

As with all information on this website, this is not an official source. We gather and distill information so that’s easy to access and understand, but we can’t share every possible variation and exception. Always refer to official sources and verify that information provide applies to your unique situation.

The general response to this question is “Don’t sell back your leave! You’ll lose BAS and BAH for all that time.” While that makes sense, it’s a overly simplistic answer to a less-than-simple question. It assumes that your two options are to:

2. Get out early and sell your leave. But it’s rare that you have those two exact options and none other.

Some people can’t control their separation date (such as high year tenure retirements), some people can’t take terminal leave, and many folks will probably want to do a combination of the two.

Is Your Date Flexible?

Some situations have flexible separation/retirement dates, and some situations don’t. This is going to make a big difference in your options, and how you might choose to maximize the things that are important to you.

Can You Take Terminal Leave? Do You Want To?

Not every person takes terminal leave. Sometimes the command doesn’t authorize it, and sometimes folks just choose not to (for whatever reason.)

If you work right up to your separation date, you’ll continue to receive your allowances for that period of time, and you’ll also have leave to sell back. If you take it all as terminal leave, you’ll continue to receive allowances during your terminal leave, but you won’t have leave to sell back. If you sell it back, you don’t get allowances for the dates that you are selling back.

How Much Are Your Allowances Actually Worth?

Depending on your rank, dependency status, and location, the amount of BAH will be different, and BAS is higher for enlisted than officers. For example, if you’re an E-4 with dependents living in New York City (BAH $2823 plus BAS $369, your allowances are a lot more than a single O-6 living in Fort Smith (BAH $1251 plus BAS $254). You could even make the argument that it’s the proportion of your total pay that matters: In these two examples, allowances make up more than 56% of the E-4 in New York’s income, whereas they are only 12% of the O-6 in Arkansas’ income.

The value of the benefits also applies to medical coverage. Additional medical coverage is a lot more valuable to a family with special needs kids than it is to a young, healthy, single person.

Now, I know some people will say – “It doesn’t matter how much! Free money is free money.” If you feel that way, great, don’t consider this factor. But for many folks, HOW much money is an important part of the equation.

Are You Starting A New Job?

Some new jobs won’t hire you while you are still officially on active duty, and some jobs have a waiting period after you leave active duty. If you are itching to get to work, and being on active duty is a problem, then it might make more sense for you to go ahead and get out and sell the leave.

What About Those Taxes?

Taxes are withheld at a high rate on sold leave, and a lot of people will tell you that you shouldn’t sell leave for that reason. However, what is withheld is not how much you will actually pay when you file your income tax return at the end of the tax year. Depending on your overall tax situation, you may receive a large chunk of that back (or you may owe more, if you owe more taxes overall.) A chunk of money could possibly put you into a higher tax bracket, but of course you’ll only pay the higher taxes on the amount above the threshold.

Keep in mind that there may be some other benefits that are slightly different for retired folks, vs. those still on active duty during terminal leave. The big benefit that jumps out to me is Space A travel – you’re Category 3 while you are on terminal leave, but you fall down to Category 6. If your immediate post-work plans include Space A travel, being on terminal leave is a huge benefit over being retired.

Let’s take the case of Sally Sailor. Sally is retiring this summer, and she has 60 days of leave on the books. There are four possible scenarios for Sally and her leave (and a bunch of scenarios that combine elements of these four.)

Scenario 1: Sally is going to retire on 1 July. She takes terminal leave starting on 1 May. She continues receiving BAS and BAH through her terminal leave. In this scenario, Sally is benefiting from the additional allowances but isn’t selling back any leave*.

Scenario 2: Sally was going to retire on 1 July, but decides to sell back her leave and retire on 1 May. She does not receive those allowances for the two months she could have been on active duty, but she does receive the money from selling back the leave.

Scenario 3: Sally is going to retire on 1 July. She continues working until 30 June, receiving allowances during that time. She also sells back her leave.

Scenario 4: Sally is able to push back her retirement until 1 September. She works until 1 July and continues collecting allowances for July and August. She does not sell any leave.

Obviously, each situation is different. Some options may not be available to every person, based upon law (for mandatory separations) or command requirements. And you’ll actually likely end up with a combination of two or more of these possible scenarios, perhaps pushing your retirement back by a month and selling half your leave, or any other final disposition of your time and leave.

Almost Everyone Sells Back Some Leave

Even if you endeavor to take all your leave before you separate, you’ll probably sell back a couple of days because you continue to accrue leave while you are still on active duty. It’s rare to be able to math that out and coordinate with your command to take exactly the amount of leave you have left. But if that’s your goal, be sure to include the additional leave earned during leave.

Some of my benefits-smart friends have also written about this subject. If you’d like to see their thoughts, check out these articles:

Terminal Leave: Take it or Sell it Back? Pros and Cons of Both Options at The Military Wallet

Is It Better to Sell Back Leave of Take Terminal Leave? at Cash Money Life