This post is part of a larger series about the Survivor Benefit Plan. Here’s the complete list of posts.

Everything About The Survivor Benefit Plan

Retiring Military: Should You Choose SBP?

10+ Places To Learn About The Survivor Benefit Plan

From The Mailbag: Term Life Instead of SBP

From The Mailbag: SBP When You Marry After Retirement

The Survivor Benefit Plan (SBP) is often the most important decision of your financial life, and it is also probably the most confusing.

I can not emphasize enough how vitally important it is to thoroughly understand the Survivor Benefit Plan if a member of your family will remain in the military until retirement. While active duty members are covered by SBP, this coverage is automatic. Coverage after retirement requires a cost-benefit analysis, decision, and the signing of the appropriate paperwork.

The issue of military pay for surviving spouses (widows or widowers) is confusing and a little challenging. Military pay, retired or active, ends with the death of the service member, retired or active. However, a program was established in 1972 to allow retiring service members to purchase coverage that provides monthly income to survivors after the service member’s death. This is a separate program from military retirement pay, and it requires certain actions and payment for the coverage after retirement. Coverage for active duty service members is automatic and does not require any action or payments. 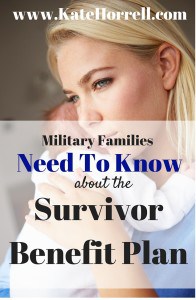 This program is called the Survivor Benefit Plan (SBP). It is an annuity, with premium payments made from the retired pay, and a large portion (about 45%) of the cost is paid by the government.

The most important thing to know is that all aspects of the SBP decision are made when the service member retires. With very few exceptions, any election made at retirement is irrevocable. If married, the spouse is required to agree with the service member’s SBP choice to elect anything less than full SBP. It is very important that retiring service members and their spouses understand all the aspects of SBP so that they can make the right election at the time of retirement.

SBP provides monthly income to the beneficiary after the military retirement pay ends due to the death of the service member. In addition to its relatively modest cost, SBP provides an attractive income stream because it is inflation adjusted each year and it continues until the death of the beneficiary. The benefit amount is either 55% of retired pay, or a smaller amount may be selected when enrolling in SBP.

Why SBP Instead of Commercial Insurance or Annuities?

Key features of SBP that distinguish it from other products include:

How Much Income Is Provided By SBP?

The base amount is calculated as a percentage of full retired pay, and therefore adjusts with each retiree Cost of Living Adjustment (COLA). With each adjustment in base amount, there is a corresponding adjustment in premiums and benefit payments. This is another way that SBP ensures that benefits are not diminished by inflation.

How Much Does SBP Cost?

SBP premiums are always calculated as a percentage of the base amount of coverage. The cost of coverage depends on which category of beneficiary is selected. The most frequently selected beneficiary is the spouse or former spouse, and the premiums for these two categories are the same. For spousal coverage, the monthly premium is the lesser of:

For example, $3000 of base amount covered would require a $195 monthly premium for spouse or former spouse coverage.

Premiums for child coverage are based upon the age of the retiree, the age of the youngest child at the time of retirement, and the age of the spouse/former spouse, if combination coverage is selected. Contact your finance or admin folks to get exact costs.

The “Paid Up” Provision

SBP premiums to be considered “paid up” after 30 years or 360 payments, and having reached age 70.  Once you’ve reached those two milestones, your coverage remains in force without any more payments due. This provision has specific parameters – check with your finance or personnel office for more details as it may apply to your exact situation.  It may seem like you’ll never make it to 360 payments, but I actually know people who are paid up. (Heck, I’m related to one 🙂 )

SBP premiums are deducted from retired military pay pre-tax, which reduces the overall cost of the premiums.  For example, if a retiree is in a 25% tax bracket and is paying premiums for spousal coverage at a $3000 base amount, here is a comparison of how paying the premiums pre-tax means that overall taxes are lower.  You can also look at it as if the tax benefits are decreasing the cost of the premiums.

Income from the SBP annuity is fully taxable.

One downside to SBP coverage is that you do not have the choice whether to pay premiums with pre-tax or post-tax money.  However, it would be unusual for a beneficiary to be in a higher tax bracket than the covered retiree.  Therefore, the lack of a post-tax premium option isn’t negatively affecting many people.

Important note: The SBP-DIC offset is being eliminated over the next few years. This information remains here for those transition years and for reference.

There are multiple groups of people who can be covered by SBP, but I will group them into three general groups to make it a little more simple.  I am going to give the synopsis of coverage here, because there are so many rules for each individual classification.

Spouse/Former Spouse:  This is the primary category of SBP coverage, and may also include coverage for a former spouse.  Unlike some other military benefits, only one spouse/former spouse may be covered by SBP at any time, and there are a web of rules regarding changes.

Children:   Children may be covered in conjunction with Spouse or Former Spouse Coverage, or they may be covered alone in the Children Only category. Covered children may only be the children of the covered spouse.  You can not cover a spouse from one marriage and children from another marriage.

An eligible dependent child must be your unmarried legal child, under the age of 18 or  under 22 if  enrolled in an accredited college or university. Incapacitated or disabled children are at any age. An incapacitated or disabled child is defined as a child who is incapable of self-support because of a physical or mental disability which existed before the 18th birthday or which was incurred before age 22 while child was pursuing a full-time course of study.

Children are the only category of beneficiary that can allow a retiree to designate more than one beneficiary at a time, though payments may not be received by a spouse/former spouse and children at the same time. Multiple children will share the total benefit if Children Only coverage is selected, or if Spouse/Former Spouse and Children coverage is selected and the Spouse/Former Spouse stops receiving benefits due to death or remarriage. The child category includes not only natural children, adopted children, and step-children, but also may include grandchildren and foster children who meet certain eligibility criteria.

Others: Service members who do not have a spouse or children may elect SBP coverage for people who have an “insurable interest.” This is limited to one individual family member or non-family member who falls within certain criteria. The family member may be a the only eligible child of the service member (elected in lieu of child coverage), or it may be the adult non-dependent child, parent, step-parent, sibling, grandchild, niece, nephew, aunt, uncle or cousin. A non-family member may include a business partner or joint owner of property. Claims of insurable interest must be documented for non-family members, or family members whose relationship is further than cousin. This category is very helpful for couples who choose not to marry, yet want to provide benefits to their partner.

Should You Elect SBP Coverage?

For many military families, full SBP coverage is the right choice. I used to say it was absolutely right for everyone, and then I started working with some families who had enough outside resources to make SBP unnecessary. If military retirement pay is a small part of your overall income strategy, then SBP may not be right for you. Every situation is different.

I like to look at lifetime income planning like a bucket.  Your goal is to fill your bucket with a variety of sources of income until it is full. SBP is an affordable and quality program to fill a big chunk of your bucket if you don’t already have other big things in that bucket. Other contributors to that bucket might include any other pensions from the spouse’s employment or the service member’s second career, income provided by TSP, 401(k)s or 403(b)s, life insurance or other annuities, Individual Retirement Arrangements, real estate, and other income-producing assets.  I go over ten things you should think about in Should You Choose SBP?

Even though this post is over 2,000 words long, I still haven’t covered all the nuances of special situations.  Be aware that there are many regulations and issues regarding former spouse coverage, disabled child coverage, and insurable interest coverage, to name just a few. You can find more resources to learn about SBP at 10+ Places To Learn About The Survivor Benefit Plan.

This topic is dear to my heart, and I love to help people understand it better.  The more questions you ask, the more everyone learns.  I look forward to your comments and questions.

This post is part of a larger series about the Survivor Benefit Plan. Here’s the complete list of posts.

Everything About The Survivor Benefit Plan

Retiring Military: Should You Choose SBP?

10+ Places To Learn About The Survivor Benefit Plan

From The Mailbag: Term Life Instead of SBP

From The Mailbag: SBP When You Marry After Retirement