I’ve noticed a lot of frustration about taxes on military bonuses. That’s not surprising, because it IS frustrating if you don’t understand what’s going on. But it doesn’t have to be too hard to understand.

First, you have to have a firm grasp on how income taxes work. If you are not sure, then read How Income Taxes Work. Go through your tax return line by line and ask questions. The internet is full of super-helpful information.

The part that gets people frustrated is that there are two ways that an employer can withhold taxes on bonuses: at your regular rate, or at a flat rate of 22%. DFAS withholds at 22%. I’m not sure exactly why they make that choice. I suspect it is because most people would rather have a little more withheld than not enough. But regardless of why, that’s how it is done.

So when you get that bonus, it’ll have 22% withheld for federal taxes. And a lot of people look at that and say, “Bonuses get taxed at a higher rate.” But that’s not right.

Withholding Is Not What You Pay

What’s true is that bonuses have taxes withheld at a higher rate. But the amount that you’ll actually pay in taxes isn’t determined until you file your income tax return the following year. Then, your bonus (and bonus withholding) is lumped in with all your other income and all your other withholding. If that 22% was too high, then either it will offset any amount that you would have owed, or you’ll get a larger tax refund.

Here’s an example of a service member who gets a $10,000 bonus that has $2,200 in taxes withheld from the payment. Everything else remains the same, except his income is higher, increasing his taxes, and his withheld amount is higher. 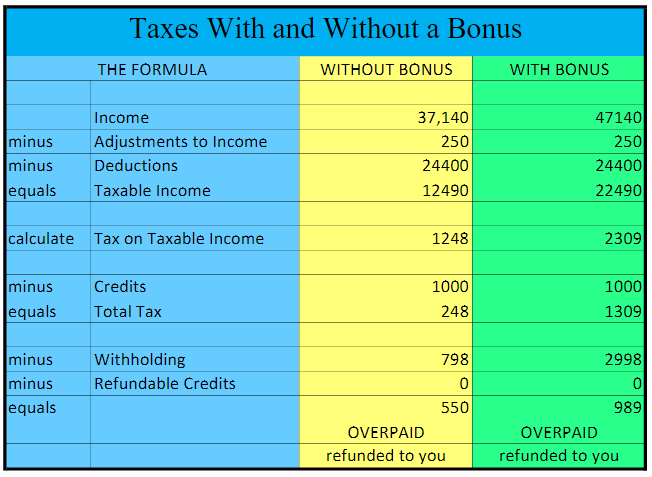 In this sample, the taxpayer had $2,200 withheld from the bonus payment, but had an additional $439 in their tax refund, so they really only paid $1,761 in taxes on that $10,000 payment.  Obviously, every tax situation will be different. This is just a rough idea of how it works.

A couple of things to think about:

Bonuses in a Combat Zone

If you are able to receive your bonus while you are located in a Combat Zone Tax Exempt area, then you won’t owe federal income taxes on that money (with some exceptions.) Schwing!

Bonuses can be put into retirement savings accounts such as the Thrift Savings Plan (TSP) or an Individual Retirement Account (IRA).  If you put it into a Roth account, it won’t give you any tax benefit now, but it will grow tax-free and distributions later will be tax-free.  If you use a traditional account, you won’t be taxed on that money now but future distributions will be taxable.

You Can Save More If You’re In A Combat Zone

If you are in a Combat Zone Tax Exempt area, you can contribute above the usual limit. There are some tricky rules about contributions, because of the ways that different rules work together. Doug Nordman has done a great job of explaining it in this article: Maximizing Your TSP Contributions in a Combat Zone. Get some help if you’re a super-saver who is going to exceed the yearly contribution limits.

Enlistment and Reenlistment Bonus Guide – Everything You Need to Know about Bonuses.

Still confused about taxes on military bonuses? Ask questions in the comments. I’ll answer them for you, plus update this post to make it more clear.

Yes, military bonuses are taxable income unless exempt because they are earned in a Combat Zone Tax Exempt location and you meet the other qualifications.

There is no tax rate on bonuses. They are taxed at your regular income tax rate. There IS a set withholding rate of 22% (2023) for bonus payments.

How are military bonuses paid?

Military bonuses may be paid in a lump sum or installments. You may have a choice, or you may be paid as the program specifies.

Is there a military bonus tax calculator?

There is no military bonus tax calculator because there is no single rate of tax for military bonuses. The actual tax you pay will depend on all your factors, including filing status, total income, deductions, and tax credits.

For more information on military tax issues, you might enjoy:

What Military Moving Expenses are Tax-Deductible?