The IRS has announced the 2023 contribution limits for tax-advantaged retirement plans. Take advantage of your increased military pay for 2023 to beef up your contributions and save more for retirement.

Don’t forget that you can contribute to both a 401(k)/TSP type employer-sponsored plan and an Individual Retirement Arrangement (IRA), and that non-working spouses can have IRAs, too.

The elective deferral limit, which is the “regular” limit on employee contributions, rises to  $22,500 for 2023. This is the most an employee can contribute to their employer-sponsored plans, such as the Thrift Savings Plan (TSP) under typical situations. Employer or government matching funds do not count towards that limit.

There is an additional catch-up limit for those who are age 50 or older during the year. Those folks can contribute an additional $7,500 to their employer-sponsored plans, for a total contribution of $30,000.

Then, there is another limit, called the annual additions limit. The annual additions limit applies to the total amount that can be contributed to these plans. For most people, this is the limit for the total of both employee and employer contributions, but there’s a special twist if you spend time in combat zone during the tax year. This limit rises to $66,000 (or $73,500 if you’re 50 or over.) There are some tricky rules if you’re hoping to contribute extra while you’re in a combat zone. My friend Doug Nordman has the best article I’ve read on the topic: https://the-military-guide.com/maximizing-your-thrift-savings-plan-contributions-in-a-combat-zone/ Get professional help with this if you’re not 100% sure what you’re doing.

The 2023 contribution limits to IRAs rises to $6,500 per person, with an additional catch-up of $1,000 if you’re age 50 or older. IRA contributions must be made from earned income, but you can contribute to one spouse’s IRA with income earned by the other spouse. Technically called a spousal IRA, they’re not a special type of IRA. It’s just a special rule that permits you to use another person’s money to fund your IRA. 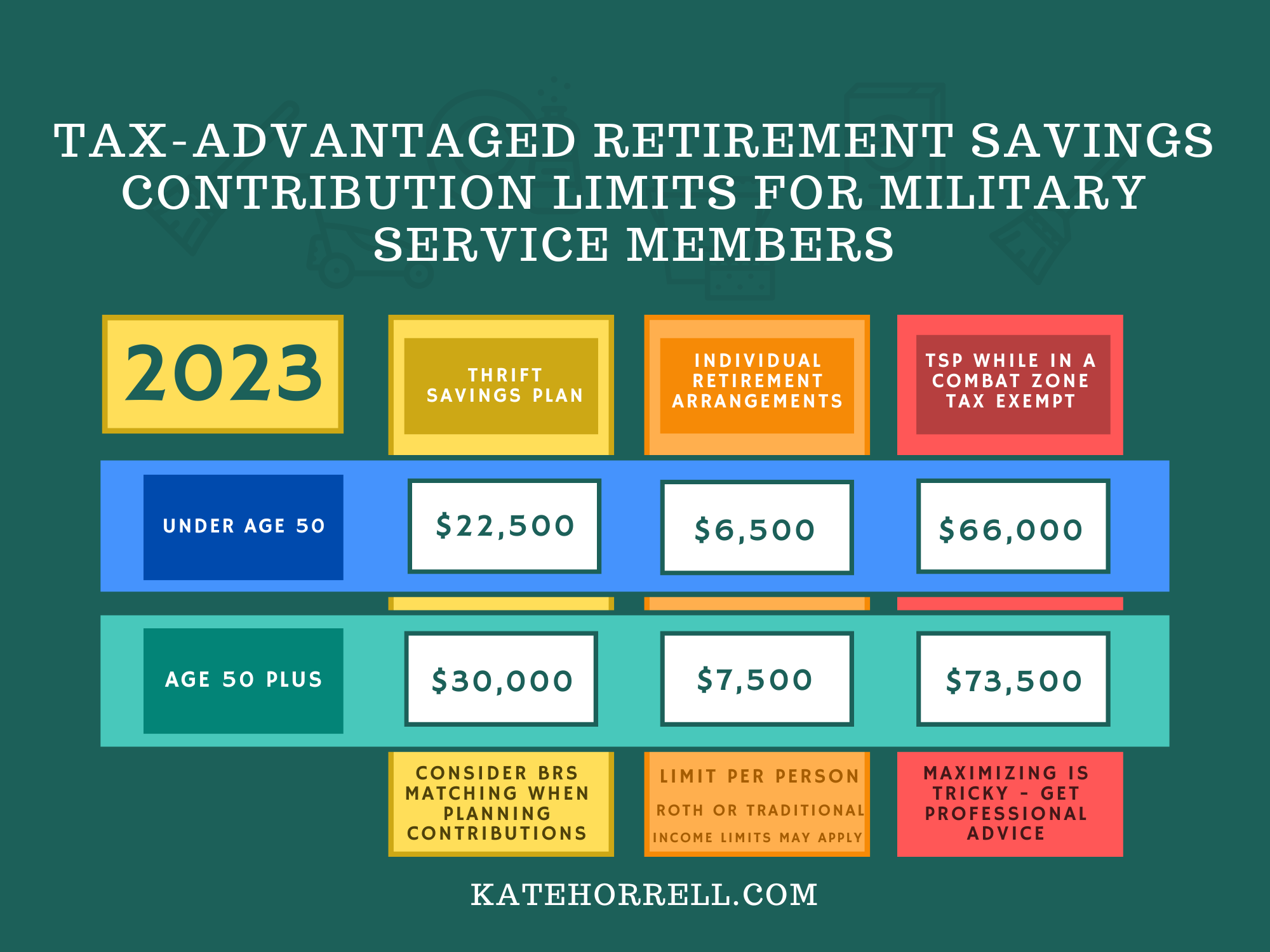 Keep in mind that you can have your TSP money in either a Roth or a traditional TSP account, or both, and you can also have an IRA that is either Roth or traditional, or both. They’re entirely separate. You can have both a traditional and Roth account, as long as the total amount contributed stays under the limits for that account type.

Let me know if this is confusing! I always like to find new ways to explain things!