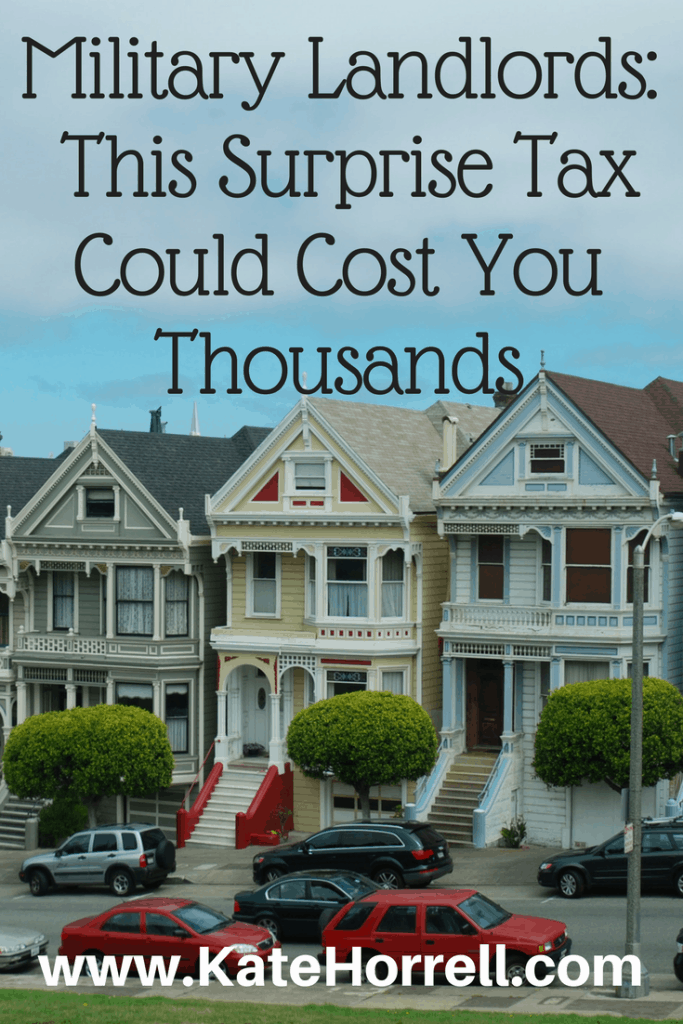 My friend Forrest has shared his article about depreciation recapture: What Military Landlords Should Know About Section 1250 Depreciation.  Sometimes it’s helpful to hear things from two different voices 🙂

You’ve owned a rental property for a few years, and it’s worked out pretty well.  You’ve made a little bit of money most years, and you’re looking forward to cashing out the profits.  And then you get the tax bill, and realize that most (or all!) of your “profit” is going to taxes.

One of the most confusing parts of having a rental property is understanding how the  taxes will work when you sell the property.  I’ve been a landlord for 20 years and I’m only fully understanding this now.  (I’m a little slow sometimes.) And I’ll tell you what – I may have done some things differently along the way if I had understood the tax implications a little better.

Possibly the most complicated part is how you are taxed on the depreciation you’ve taken over the years.  The taxes on depreciation recapture can make the difference between a profitable or not profitable rental experience.  Because these taxes are paid at the sale of the property, not understanding them and including them in your profitability analyses can mean that your numbers are wrong.  Failing to account for taxes can mean that you think your property is more profitable than it actually is.

Note:  I’m not a tax professional or real estate attorney.  Use this to figure out what you know, and what you don’t know, and consult with your professionals to see how this applies to your specific situation.

Don’t forget, depreciation recapture isn’t the only tax you need to worry about when you sell a house. Read Capital Gains Rules for Military Families to see whether you’ll be subject to capital gains taxes.

The idea behind depreciation is that whatever you’re depreciating is losing value each year. For most types of real property – carpets, computers, cars – that’s true. Our tax code generously allows you to claim that loss of value as a loss on your taxes for certain types of property. But that isn’t always true for real estate. In fact, real estate often increases in value. If you sell for more than the depreciated value of the property, you’ll have to pay back the taxes that you didn’t pay over the years due to depreciation.

However, that portion of your profit gets taxed at a rate up to 25%. (Even though you maybe were only benefited by 10 or 12% when you depreciated.)  This is a very simplified explanation of the math, but good for estimates.

Here is an example:   Let’s say you had a house that had a house value (not land) of $100,000 when you put it into service as a rental. You’d take about $3,600 in depreciation each year. If you are in the 15% tax bracket, you’ll pay $540 less in taxes each year due to depreciation. (The 15% tax bracket no longer exists, but we’ll keep it for purposes of this example.)

After five years, you sell the house for more than you paid.  In calculating the taxes on the sale, you’ll take the $18,000 you’ve taken in depreciation, and pay $4,500 in recaptured depreciation taxes on the sale.  (Again, this is the extremely simplified explanation of the math.  It’s actually much more complicated.)  You pay $4,500 in recaptured depreciation taxes even though you only benefited by $2,700 in taxes during the years you were depreciating!

Here’s the part of the post where I was going to put in many examples and explanations and charts and pictures about how this actually works.  However, there are too many variables and I could not come up with a single example that was clear enough that it didn’t create more questions than answers.  You’re going to want to get a tax professional to handle this in the year that you sell.  Go ahead and meet with that person now and have them explain how your situation will unfold.  I do not advise doing this yourself or using a tax preparation program.

I apologize that I couldn’t include more concrete examples, but I just didn’t think it would be responsible.

Can You Avoid Depreciation Recapture Taxes?

There are only two ways to avoid depreciation recapture taxes.   Both of them are bad for you, but one of them might please your heirs.

If you sell at or below the depreciated value, then there is no depreciation to recapture.

If the house becomes part of your estate after death, the cost basis in the house is reset.

You can delay the depreciation recapture taxes on a sale by reinvesting the proceeds into another property, in a slightly-complicated tax move called a 1031 Exchange, or a Starker Exchange.  If this interests you, you need to do a LOT of research and learn all the rules and details.  I recommend BiggerPockets.com’s 1031 Exchange Guide:  Basics, Resources, and Intermediaries.

You can NOT avoid depreciation recapture taxes by making the property your principal residence.  You will still owe the taxes when you sell the property.

Be sure to investigate the other taxes you may have to pay when you sell the property. This may include state and/or local income taxes to the state where the property is located and/or capital gains taxes.vThe sale of property might also bump you into the dreaded Alternative Minimum Tax (AMT.)

The Double (or is it Triple?) Whammy of Depreciation Recapture

Recently, someone said to me, “Depreciation recapture isn’t just a random tax. You’re repaying the money you saved on your taxes in previous years. It’s a wash.” On one level, they’re right. You’ve saved money on your taxes each year by reducing your income on the property by deducting depreciation. Now you’re just repaying all that savings. Except it’s not that simple.

Taxes are an important part of the profit and loss equation of owning a rental property.  There are many types of taxes that you may owe when you sell the property, including the taxes on the recaptured depreciation.  Understanding these taxes from the beginning will help you make a much more accurate analysis of the value of your investment property, and will help you make better decisions about your property.

Update and An Example:

I was loathe to include an example because this stuff can be so confusing. But I explained it to someone yesterday and I think the explanation is pretty good. So, I’m copying it here:

It’s a slightly tricky formula. Let me try to explain using an office supply. Let’s say you buy a computer for $1000, and it is on a 10-year depreciation schedule. (It’s not, but it makes the math easier. Each year, you depreciate it $100 every year, and each year, your cost basis goes down $100. So, after year one, your cost basis in the computer is $900, after year two it is $800, etc. Let’s say you depreciate the computer for 5 years and now it’s cost basis is $500.

For most things in this world, the value/saleable price of the object goes down faster than you depreciate it. Therefore, after 5 years, you might be able to sell the computer for $200, so you wouldn’t have any gain and it wouldn’t be a taxable event

But if for some reason your computer was still worth $600, you’d owe taxes on the $100 between its cost basis (now $500 because you’ve depreciated it for five years) and how much you sold it for.

This is where it gets tricky. Any portion of that taxable amount (in this case, $100) that can be attributed back to depreciation gets taxed at a rate up to 25%. Then, you pay regular capital gains on the amount above that.

A little note: This article makes reference to tax brackets that no longer exist. I’ve changed them when it doesn’t change a bunch of math, but left them when the examples are otherwise solid.